From November 1848 until February 1849, sessions of the Austrian Constitutional Assembly took place in the Kroměříž chateau. In response to the March and May revolutions of 1848, it originally began to work in Vienna, the monarchy’s capital, and resulted in reduction of censorship, abolition of corvée (forced labor of subjects at the nobleman’s property) and proclamation of a constitution. However, it did not satisfy the revolutionaries. Elections to the Constitutional Assembly thus took place in June and July and the Assembly gathered for the first time on July 22, 1848. Another reversal happened in October and Emperor Ferdinand I (also known as King Ferdinand V of Bohemia) fled to Olomouc where he found refuge in the Archbishop’s Palace. Short time later, the entire Assembly moved to Moravia as well; due to delays because of the relocation of deputies, the actual sessions started as late as November 22.

At first Brno was considered as the location, because there were suitable premises available, but the city was not recognized as completely safe in the end and Kroměříž was chosen; it is said to be suggested by historian František Palacký who knew the city and its chateau thanks to his research work in the chateau archives. The choice was not accepted unanimously: the German deputies favored Linz, Austria and for other deputies, Kroměříž was just a place between the Olomouc military fortress and the Špilberk prison in Brno.

The so-called Great Dining Room (today’s Assembly Hall) of the chateau was adapted: a tribune with parliamentary benches and tables for the Presidency were transported from Vienna and Prague. In addition to the Assembly itself, the chateau also hosted the ministries of war and of interior as well as apartments of the ministers, a parliamentary post office, a parliamentary café, a patisserie and a restaurant. The Liege Hall served as a meeting place for the Constitutional Committee of the Assembly, among its members being e.g. František Ladislav Rieger,

The long and protracted parliamentary negotiations on the Constitution thus continued in Kroměříž, but due to the actual situation with the revolution gradually suppressed in Prague, Vienna and Budapest, the importance of the Assembly further diminished. The government of Prime Minister Felix Schwarzenberg also drafted, without the Assembly, a new constitution (the “Imposed March Constitution”), which finally came into force on March 4, 1849.

The new emperor Franz Joseph I, who in December 1848 replaced his uncle Ferdinand I, immediately issued an order to dissolve the Kroměříž Assembly. Army occupied the city and dispersed the Assembly. The constitutional document prepared by the deputies in Kroměříž thus ended up as a concept never to be approved. Besides drawing attention to Kroměříž in Moravia, the parliamentary Assembly also brought a number of important and educated people to the city and they stayed here for a long time: not only Czechs, but also from Austrian-German and Polish milieu. Memorial plaques on various Kroměříž houses that housed Czech deputies (e.g. František Palacký, F. L. Rieger and others) are physical reminders of this event. Besides them, there were also historian Václav Vladivoj Tomek, playwright Josef Kajetán Tyl, poet and archaeologist Jan Erazim Vocel, lawyer and politician František August Brauner and journalist Karel Havlíček, who would then resign in December as he sensed that the Assembly is pointless.

Another important event of the 19th century for Kroměříž was the meeting of the Austrian Emperor Franz Joseph I and the Russian Tsar Alexander III at the chateau on August 25–26, 1885. The Kroměříž representatives first learned about the planned meeting on Aug. 8 and the mayor, Baron Ferdinand Bojakovský, had three departments set up for this purpose: the security, decoration, and humanities departments. As the Austrian authorities provided a lot, the town hall only had to worry about the city appearance: the condition of local roads was not good and a new road connecting the station with the city center had to be built by military sappers from Olomouc. They also erected 33 massive masts at the railway station for Russian, Austrian, Bavarian, Moravian and Czech flags. Next to the iron bridge across the Morava river they built two pyramids decorated with twigs and red-and-white drapery, and also a massive, 18 meters high ceremonial gate. Its passage was 11.5 meters high and 8 meters wide and it was crowned with a two-meter-high gilded statue of a woman, considered to be Austria by some and the Angel of Peace by others. The woman placed green wreaths on the heads of two children standing next to her: one holding a shield with the Austrian emblem and the other with the Russian emblem. On the Great Square, around the Mary’s Column, there were four ten-meter-high obelisks decorated with twigs and cloth draperies; gas lamps on their tops created monograms of the both rulers. Fresh twigs transported in 30 railway wagons decorated the city. The Kroměříž chateau, as the summer residence of the Olomouc archbishops, also had to undergo a major reconstruction. A number of artisans guided by an imperial architect performed real wonders in a short time: most of the renovated rooms were equipped with furniture and luxury accessories, imported by 26 wagons from Vienna, Prague and Budapest – one of them was insured for 110,000 Austro-Hungarian guldens. A telegraph station was set up on the ground floor of the chateau and eighty journalists from all over Europe gathered in Kroměříž. 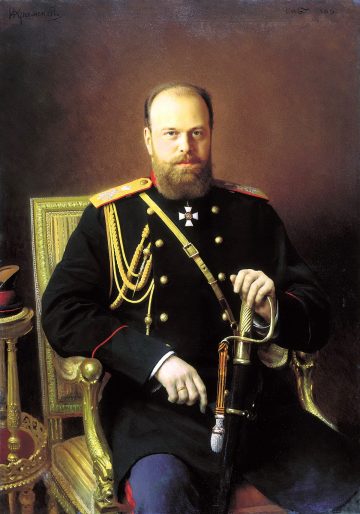 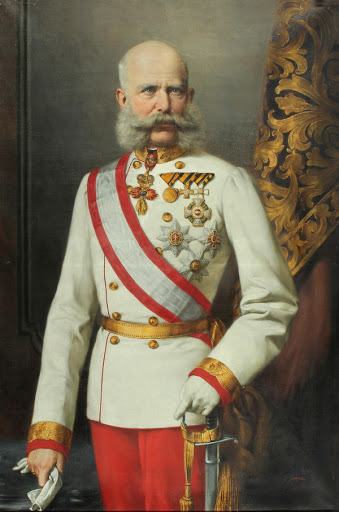 Franz Joseph I arrived the day before, on Monday, Aug. 24. His imperial train stopped at the Kroměříž station at 3 p.m., the Emperor was dressed in a field uniform of a general and the Empress in a simple black dress without jewelry and ornaments. Crown Prince Rudolf and the Emperor’s younger brother, Archduke Karl Ludwig, accompanied them. The citizens cheered the imperial family along the road and when the carriage drove from Vodní Street to the Great Square, a band of several hundred peasants from the nearby villages stood there in ceremonial costumes on their best horses. Franz Joseph I first gave an audience at the chateau and received deputations of the citizens of Kroměříž and the surrounding villages and towns. A parade of all deputies and associations then followed. Although the weather was not good and it rained, nothing diminished the monumentality of the significant event. In the evening, gas lamps with monograms of the Austrian emperor and the Russian tsar illuminated the streets.

The tsar family was to arrive in Kroměříž at noon on Tuesday, Aug. 25. Franz Joseph I and Crown Prince Rudolf, both dressed in uniforms and decorated with the Order of St. Andrew, set off to meet them in Hulín; a Russian train arrived there at half past 11. The wagons were huge to provide passengers with perfect comfort and two locomotives had to haul them. Empress Elizabeth and Archduke Karl Ludwig were awaiting the noble guests at the Kroměříž railway station. A welcoming ceremony followed, with the military band playing the Russian anthem. The two ruling families held conversations in French. As the Tsar was afraid of assassination, because his father had died this way four years earlier, he enjoyed the cheering crowds only briefly and his carriage rode through the first entrance into the Chateau Garden. In addition, two huge Cossacks constantly guarded him. After a short rest, the two rulers met for their first conference; it lasted the entire afternoon, from 1 to 5 o’clock. They spoke face to face without anyone else present and no record was made, so we can only speculate about the content of their discussions. At 6 p.m., the banquet attended by 78 people began and a theatrical performance by selected actors of the imperial theater from Vienna took place afterwards in honor of the tsar family. The Liege Hall on the second floor of the chateau was renovated for this purpose.

On Wednesday, Aug. 26, only foreign ministers, Gustav Count Kálnoky for Austria and Nikolay Karlovich Girs for Russia, held political talks; they did not make any statement either. In the meantime, a hunt for deer and fallow deer took place in the nearby archbishop’s forest Zámeček; a total of 41 deer and fallow deer were killed, the tsar killed 6 pieces and the Emperor and Crown Prince Rudolf 5 each. The rulers were very pleased and Archbishop Friedrich von Fürstenberg received the Order of St. Stephen from the Emperor. The lunch and a time of rest before the journey followed. The tsar family left at 9 p.m., the Emperor left shortly after 10 p.m. The empress remained in Kroměříž until the following day and left unnoticed at 9 a.m. on Thursday, Aug. 27.

This applies to the Chateau Garden as well

This applies to the Archbishop’s Chateau as well